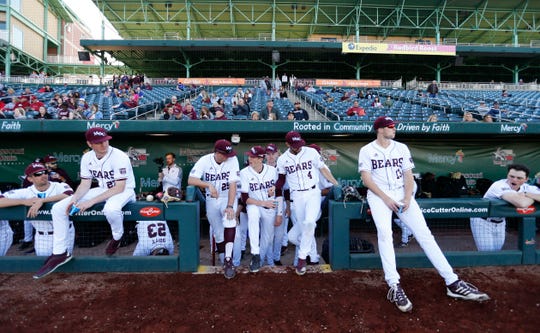 After going to the NCAA Tournament three out of the previous four seasons, Missouri State baseball took a step back in 2019.

Missouri State finished 20-36 for one of the worst seasons in the program’s decorated history. The Bears have earned the right to have high expectations year after year under head coach Keith Guttin.

Heading into 2020, the Bears are ready to put last season in the past, but they also wanted to make sure they learned from it.

“Last year was a pretty brutal year,” senior first baseman Ben Whetstone said. “We continue to preach to our guys that this is a new team and it’s a new year. Just because we had one bad year, we still have a lot of talent. We’re primed to make a good run and have a good season.”

It’s not like the Bears aren’t capable of having a quick turnaround. With Guttin in charge for his 38th season, there’s little doubt he can do it again.

After each season Guttin’s squad finished with 20-29 wins, Missouri State has won 33 or more games the next season. This occurrence has…