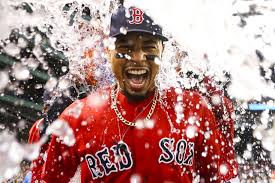 In 1918, the Boston Red Sox won the World Series. In 1919, the team failed to repeat as champions and had a mediocre year. Before the 1920 season, the Red Sox traded away their best player because of the owner’s selfishness when it came to finances. Today, it is still condemned as one of the worst trades, not only in baseball, but the history of North American sports. It put a curse over the Red Sox, and they did not win another World Series for 86 years. Wait… Sorry. Did I say 1918? I meant 2018. The aforementioned trade of Babe Ruth to the New York Yankees was awful in its own right, but that’s not what I’m talking about here. I’m talking about the trade of Mookie Betts to the Los Angeles Dodgers in 2020. Funny how history repeats itself.

On Feb. 10th, the Red Sox traded right-fielder Mookie Betts and left-handed pitcher David Price to the Los Angeles Dodgers in exchange for outfielder Alex Verdugo, and prospects Connor Wong and Jeter Downs. The Red Sox drafted Mookie Betts in the 5th Round of the 2011 MLB Draft, and after only two seasons in the minor leagues, he made his debut in 2014. Since then, Betts has become a 4-time…

Read the full text of “The Wesleyan Argus | History Repeats Itself: A Tirade Against The Mookie Betts Trade”